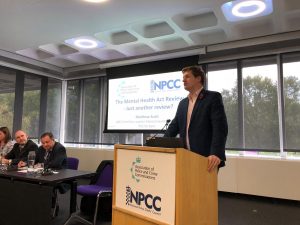 Earlier today, I tweeted a graph that was displayed at the Annual NPCC and APCC Partnership Summit by Chief Constable Sara Thornton, showing the times of day that Police Forces get the most mental health related calls.

A distinct peak at 4pm, every weekday, and 5pm at weekends. What could this mean? A natural change in the chemicals in the human body that leads to impacts upon mental health? That was one opinion offered on Twitter.

The overwhelming response in the room was not one of shock or surprise, but agreement; because a national assessment by the policing inspectorate, HMICFRS, was inline with what many have been saying for a long time is that is correlated with when some service provision within mental health and social services often ended for the day. Their report will be published soon and this is a very welcome contribution to the debate.

Later in the day, I led a session with Chief Constable Mark Collins, as mental health leads, on the mental health act review commissioned by the Prime Minister and that Professor Sir Simon Wessley asked us to be involved with. It has been great to have a welcoming approach by Sir Simon and an acceptance that things need to change so that people in crisis or who have a mental health need aren’t being placed at the door of the Police because of a lack of services elsewhere.

We have made a number of recommendations to him, and the results of his review will be published in due course. But there will be a requirement outside of legislation for action to bring all of this together, particularly in commissioning. The £2bn a year announced by the Chancellor in the Budget for Mental Health crisis services is great news. But it will need to go further to ensure we have the preventative services in place to prevent crisis and the Police becoming involved.

I have asked to meet NHS England Chief Executive Simon Stevens to ask for parity of esteem for future funding announcements, so that greater proportions of extra investment that the NHS gets goes into mental health.

We have an opportunity to make lasting changes that ensure that people suffering from mental ill health get the right support from the right person at the right time. Policing will always have a role to play, but there are three places that this support should not be given – in the company of a Police Officer, in a Police vehicle or in a Police cell.

A recent analysis I have commissioned on section 136 demand in Kent shows that on average, between May and September 2018, Police Officers spent 5600 waiting in A&E for someone to receive treatment. That’s an average of 8hours 30mins over the course of 328 incidents.

If we don’t get this right with the great opportunities we have ahead across multiple agencies in the coming years, we do need to look again at my suggestion last year of seeking reimbursement.