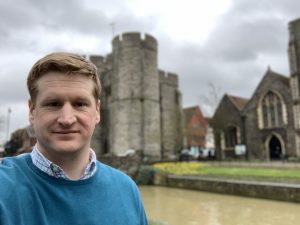 Matthew was elected as Kent’s Police and Crime Commissioner in May 2016. Prior to this he developed a significant amount of experience of advocacy and public relations that included Parliament and Government departments. He has also served as a Voluntary Scout Leader, Councillor and School Governor and he ran a community centre.

Since becoming a PCC, Matthew has quickly been given responsibilities for two key areas of national Policing business. Since March 2017, he has be the Lead Police and Crime Commissioner for Police Performance, which includes the HMIC Inspections, Crime Statistics and Chief Constable Performance. In October 2017, he was appointed the Lead PCC for Mental Health and Custody, in addition to the Performance Portfolio. Other roles and responsibilities include:

In September 2017, he joined the advisory panel for the independent review of the Mental Health Act, led by Professor Sir Simon Wessley, and in May 2018, was asked by Sir Simon to formally lead the Policing work stream of the review.

He has written for national publications including Conservative Home and Parliament Street, and done media appearances for Radio 5 Live, Victoria Derbyshire, Sky News, BBC News, BBC South East Today and local radio. His Police and Crime Podcast launched in May 2018.

He is married and lives with his wife and daughter in Swanley.

What do PCCs do?